Back
This isn't a game for casual players. If you do not like doing research on your character to be, if you don't like reading a LOT of dialog and perhaps doing some number scrunching to check armor and weapon damage then this game isn't for you. I've recently started playing again and I remade my character about twenty times over... I'm pretty sick of playing the prolog and the first chapter but I'm a perfectionist and very stubborn. My current character is doing really well so far and although I have made some mistakes with my skills selection I'm going to continue as is. 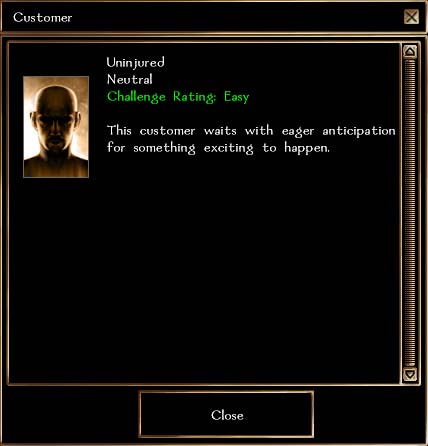 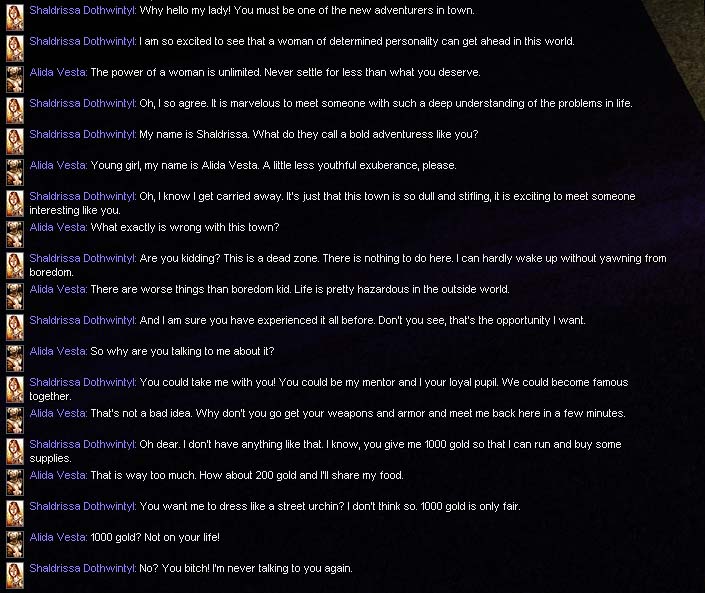 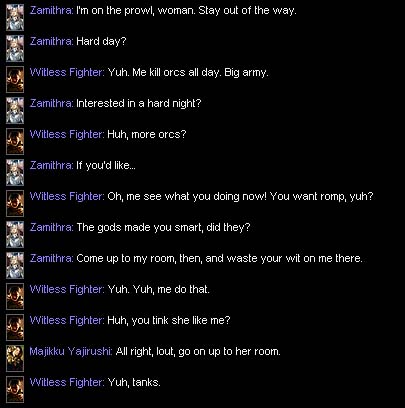 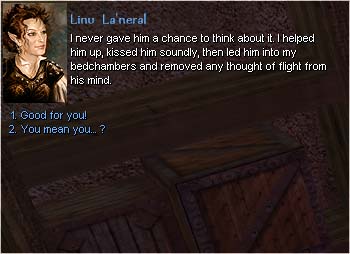 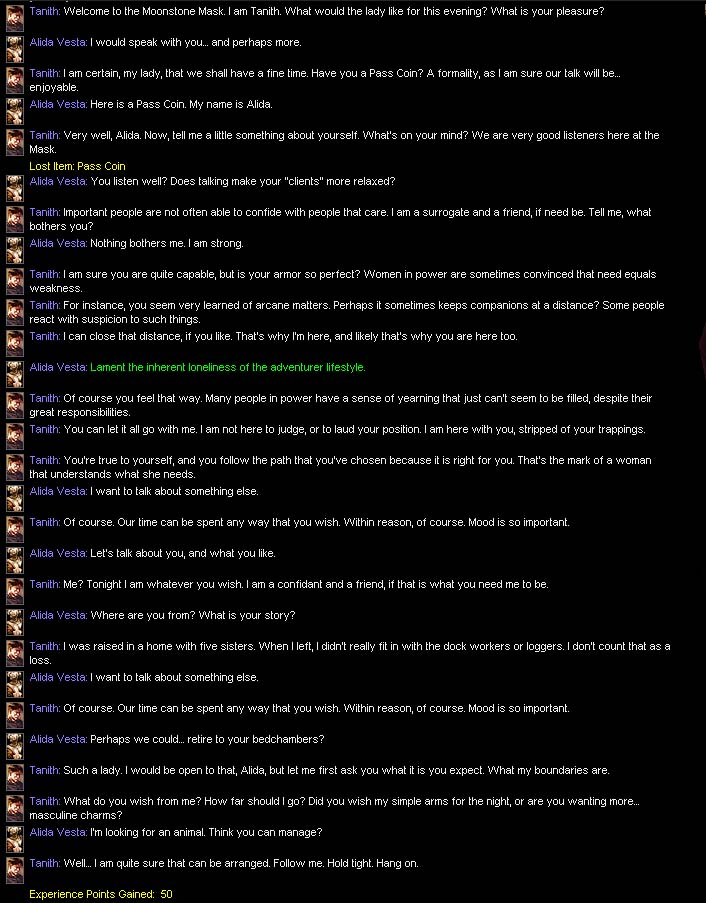 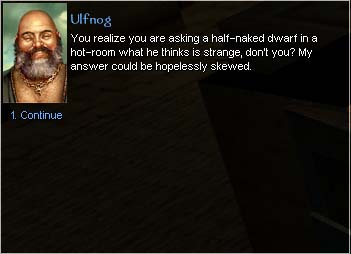 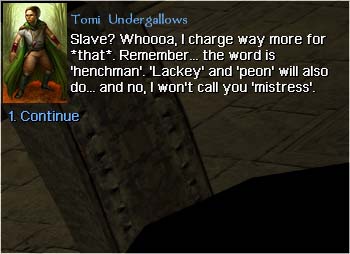 
My fourth and probably last character. Went back to the name Majikku Yajirushi, but made her a “pure” Sorcerer (that would still use a bow and have matching feats). Like all my characters this one had its issues. At level 15 I was unable to choose a 7th level spell as my charisma was too low. At level 16 was able to gain a single point of charisma but would not be able to gain 8th level spells for another 4 levels and for 9th spells I would need to be level 24. Would I restart the game/character I would definitely exchange Dex/Str for Charisma. Unfortunately the ending kinda ruined the game for me :(


+ - Chapter Four Click to collapse
Finished the game but found the ending lacking.. It’s a shame, the makers of the game clearly poured their hearts in it. A good story, detailed graphics that still hold up, an insane amount of unique conversation options and well developed characters. Yet, the ending felt rushed and incomplete. There was no.. closure.
Alida Vesta (Latin for Little winged one, Keeper of the sacred fire) The third serious character. Red dragon disciple for no other reason than I really want those wings at level 9! I was almost done with the second chapter but the game deleted my saved files.. while trying to check old saved files I temporarily moved my saves to a new sub-folder within the default save folder. The game didn’t like that. So I pretty much played this character twice.


+ - Chapter One Click to collapse
So I've played this chapter more then I cared to. I think I've played it about twenty times and cured the Wailing Death at least five times. This does mean I'm getting very efficient at it and on my last play-through with Alida it only took me about five hours. Even with my hireling, familiar and summon I eventually ended this chapter at level nine and a half.
+ - Chapter Two Click to collapse
One of the big things that always bother me about starting over is not so much having to "waste" time to get where I was before but also missing out on previous item drops. As most items are random, there is always that one item you had last game, you just can't seem to get now. Lucky me that instead of not finding that item, I've actually found two and additional really nice drops. I think Alida has been very lucky so far.

Port Llast had some interesting stories and quests. I especially enjoyed rescuing Shaldrissa after she called me a bitch for not giving her gold (curious detail is her model change).

The city of Luskan has went pretty quick, the two captains hardly put up a fight. There were some tougher customers in the Arcane Brotherhoods Tower. On the second level I found Overwizard Blaskar Lauthlon who had a resistant shield against physical and magical attacks, he does a lot of damage and can unsummon my party members. Luckily I had some area of effect damage scrolls which did the job nicely. On the sixed level I encountered Valindra Shadowmantle which died so fast I hardly had time to notice her, she apparently plays a huge roll in the novels and connecting games.
+ - Chapter Three Click to collapse
I’ve only just started the third chapter and I’m not sure if I should continue. I like the game but I’m not loving it.

The second character I leveled was a pure Sorcerer and she was doing way better than my first fighter character. The only problem was that my hireling, familiar and summon killed faster than I could cast damage spells. She was pretty much useless except for the beneficial spells I could cast on them. So I put her aside and started again with Majikku thinking I would make her a Sorcerer / Archer. She would cast beneficial spells before battle and launch arrows from the back. This combination worked very well but I should have placed more points in Dexterity... so I started over once again.
The first "real" character I recently created in Neverwinter Nights was a Half-Elf Fighter, which I specialized in dual-wielding two-bladed swords. She was very enjoyable to play and did pretty well during the first chapter. In the second chapter her opponents quickly became too hard to handle and I decided to try a different class.


Creating your character is probably one of the biggest challenges of this game. There are a lot of things to consider and personal preference might get in the way of successful game play. It is best to read up on the different options available before making your final choice. I've had to start over many times before I found a character that worked for me. Every time I started over it took away from the fun of playing.

Race
There are seven races to choose from, each with their own pro's and con's. Humans are the games default choice as they have no con's and little pro's. You can also choose a sub-type but that's just glossary.

Class
Fighter class is recommended by the game as it is very versatile and gains an additional feat every three levels. You can also choose to multi-class but this can cause an experience penalty depending on the combination and your race. Some classes can summon additional party members which will decrease the amount of experience received but will also make it easier to progress through the game.

Alignment
The initial option of good, neutral, evil and everything in between doesn't really affect your game play. Your behavior towards NPC's does. By your actions you can change your alignment and gain a reputation. Some classes do require you to be (and stay) a certain alignment, deviating from it will result in the character no longer receiving experience.

Ability
The game uses both the amount and the modifier (the amount needed to level this ability) to determine how well your character does. The higher the amount, the more of your initial points it costs to level it higher. After the character creation you are allowed to increase one ability every four levels. A tip is to spend up to the +3 modifier on your most important abilities and then level those every four levels.
Strength: Effects carry weight and melee weapon damage ("might" on ranged weapons use the strength modifier)
Dexterity: Natural dodge and ranged weapon damage
Constitution: Effects the amount of hit-points (retroactive)
Intelligence: The modifier is used to determine the amount of skill points at level up. Wizards need it for spells. Having less than 9 points will result in a character that can't talk correctly (can be fun)
Wisdom: This is important for many classes (cleric, druid, monk, paladin, and ranger). It also effects your will saving throw.
Charisma: This ability is important for paladins, sorcerers, bards, clerics and for any character that would like to get more done via conversation.

Package - Skill
Depending on your race, class and intelligence modifier, you will receive points to better your character in a number of available skills. Class skills cost one point per level, skills outside your chosen class cost two. Skill points that are not spend will be available on next level-up.

Package - Feats
Every third level you will receive a feat. Depending on your chosen race and classes you can receive additional feats. Instead of choosing feats outside of your class you can also choose to multi-class instead (beware of experience penalties when multi-classing).

They can be a great help and a great hindrance. There are six available in the game, each with their own abilities, story and quests rewards. It's best to choose a type that complements your own class, if you are a squishy class, then you might benefit from pairing up with a hardy melee type. One of my first characters was a fighter so I started with Tomi Undergallows, he is a rogue and will be able to assist with most traps and locks. Tomi can get his priorities crossed sometimes and will break off mid battle to disable a trap. Being a sorcerer right now means I have a familiar, in my case a pixie to help with traps and locks, so my current hireling is Daelan Red Tiger. With a hireling you get less experience from monsters but you will also clear area's much faster, they are worth taking along.

There is a nice list of different types on familiars to choose from. I use to choose a Panther but now I prefer the Pixie instead. She is small and can get past my Hireling and Summon when they are blocking an entrance or each other, she can also open most locks and disarm traps. Having a pixie also means I won't need to spend points in skills like Search, Open Lock and Disarm Trap. When there are multiple locks or traps close together, it's easier to manually control your familiar and queue up what needs to be opened and disarmed.

These are pretty much dumb and in some cases temporary muscle. You can give them simple commands like Stay, Attack, Follow, etc.